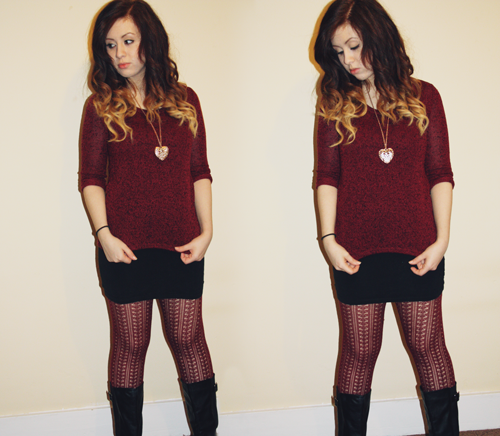 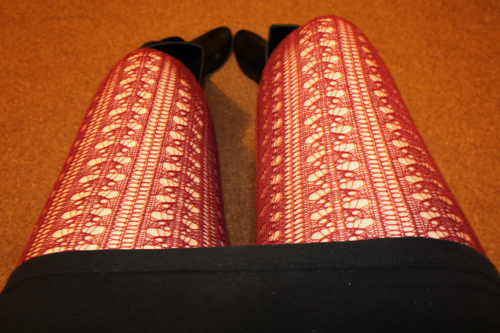 I have to say, this outfit isn’t exactly the most photogenic; slouchy jumpers and coloured tights don’t necessarily look great on film, but it’s been one of my favourite looks in the colder months (luckily, the snow pretty much skipped Canterbury, where I’m at university, so the relatively light knit didn’t cause me too much discomfort).As I’m sure I’ve mentioned at least a thousand times at On-TheBias, I’m constantly trying to force myself out of my comfort-zone, style-wise, and knitted tights are one of those purchases I’ve been meaning to make for what feels like years, but have never quite managed to get around to. This year, however, I took the plunge (finally!) and snagged myself a pair of both the burgundy and grey versions of these New Look offerings…and so far, I’m a little undecided, to be honest. They’re definitely not the most slimming of tights, for those of us who are a little bottom-heavy, but they do add a nice pop of colour to an outfit. They’re also quite an open knit, meaning they’re not ideal for the cold winter months; I ended up having to throw a pair of 100D M&S tights on underneath in order to brave the cold, so the effect was lost a little. Maybe I’ll reserve judgement until it’s mild enough outside to wear them alone.

Have you been hit by the snow yet? If so, how are you snow-proofing your outfits?

I’m Gone As the Day is Fading | Outfit

You Wear Your Best Apology | Outfit