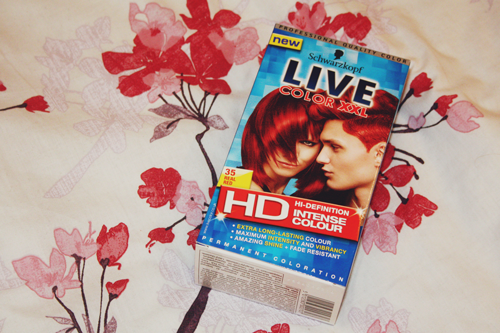 When it comes to my hair colour, I have complete commitment issues. Since my early teen years, I have had black hair (not good), blonde highlights (even worse), brown hair (which I got bored with), red highlights (which I was too broke to maintain), ombre hair (here), and auburn (here). In fact, the only colour I hadn’t tried (but always wanted to), was red. 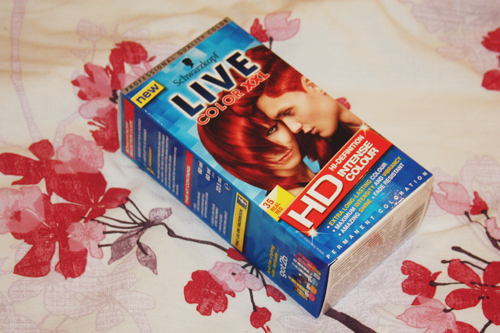 That all changed on a recent trip to Boots, when I somehow went in to pick up some of Nice N’ Easy’s ‘Root Touch Up’, and came out instead with Schwartkopf’s Live Color XXL in ‘Real Red’. Oops.

‘Real Red’ is probably one of the most intense reds in the range, and I have to confess to being completely in love with not only the shade, but the formula itself. Unlike a lot of dyes I’ve used, Live Color XXL left no residue on my hair – no greasy film, no foul smell – just a sleek, shiny, finish, and a scent that reminds me vaguely of my old ‘Timotei’ shampoo (does anyone remember that? Does it even exist any more?).
The one downside, however, is that I found it wasn’t as intense as I’d have liked it, on first application, but of course, the pillar-box red I had in my head would’ve been pretty much impossible, without bleach, so this is probably just due to my unrealistic expectations.
Overall? I am seriously impressed with the Live Color XXL range, and would go as far as to say it’s my favourite formula for a hairdye (which is pretty impressive, considering the sheer number of brands I’ve used, over the years). I’d really recommend ‘Real Red’, in particular, to anyone who’s been wanting to try being a ‘red head’ for a while, and hasn’t quite taken the plunge.

Schwarzkopf Live Color XXL in ‘Real Red’ is available from Boots & Superdrug stores nationwide for an RRP of £5.49, but is currently available on the Boots website for £4.