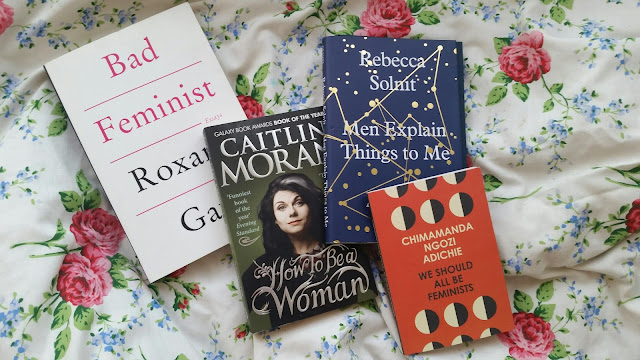 The word ‘feminism’ is being thrown around popular culture, and in the media, a lot, lately, and it seems to be dividing a lot more people than it unites. Personally, I’ve referred to myself as a feminist since studying it during my A-Levels, but I’ll be the first to admit that I’m not particularly educated on the subject; with the constant debate that seems to follow the word around, it can be a little difficult to know where to begin.

Naturally, I took to social media for advice on the subject, and, between Twitter, Facebook, and Goodreads, I managed to throw myself together a pretty comprehensive list of ‘feminist reads’, and, to save you the trouble, I’ve thrown together a quick list of the absolute ‘must-reads’ that really formed my ‘feminism starter-kit’.

Bad Feminist | Roxane Gay:
I knew I had to have this as soon as I read the synopsis on amazon; is it possible to identify as a feminist, but still have a shameless love of rap music, even when it dehumanises women? Can I be a ‘good feminist’ even though I love low-brow action movies, even when all the female characters are two-dimensional, at best? This book covers all of that, and more, as well as posing some questions I’d never even thought to ask: why do I even care if I’m likeable or not?
Buy it, here.

How to be a Woman | Caitlin Moran:
This is probably one of my favourite books, ever. Whilst I won’t pretend to agree with everything Moran suggests (I like being hair-free, thank you very much), her no-nonsense approach to so many of the ‘big issues’ (as well as the smaller issues facing young women) is nothing short of awe-inspiring. ‘How to be a Woman’ is provocative, and forces you to start forming your own opinions and values.
Buy it, here.Men Explain Things to Me | Rebecca Solnit:
This was a bit of a hit-and-miss read, for me; whilst Solnit made some very thought-provoking points and observations, it was littered with essays which felt a little bit…ethnocentric, I suppose. Highlighting the feminist values in the work of Virginia Woolfe, for example, is educating, but only really hits home for true Woolfe fans (which I’ll admit, I’m not). I had to include it in the list, though, if only for the title essay, and the ‘eureka’ moment it gave me.
Buy it, here.

We Should All be Feminists | Chimamanda Ngozi Adichie:
‘We Should All be Feminists’ is an adaptation of Chimamanda Ngozi Adichie’s 2013 Tedx talk of the same name, and explores why the word ‘feminist’ has become a dirty word in the current climate – and why it should be one we’re proud to associate with. She highlights how much gender still influences much of our day-to-day lives, and references her own experiences, both in her native Nigeria and in the US, which is a real eye-opener. Whether you’ve seen the Tedx talk or not, I’d recommend giving this a read.
Buy it, here.

This post contains affiliate links but is in no way sponsored by any of the brands involved.

The New & Improved University Checklist | What to...